Hi. How about a break from politics? I debated writing about the financial cliff, Iran or what America has to look forward to in the next four years… but I settled on this story instead.

July 2010. My wife and I decided that on our annual summer trip to northern New York and the St. Lawrence River that we would stop for a night in Niagara Falls.

We drive every year. Why? Well because it saves a little money and we like to fight. I am kidding of course, it is usually 90% awesome and 10% World War III.

We packed up and left Minnesota around 4 o’clock in the afternoon. The trip from Maple Grove, MN to Niagara Falls takes about 13-14 hours and we decided to drive straight through the night. I had put my wife in charge of booking our lodging accommodations while we were in Niagara Falls. She settled on The Diplomat Inn.

We crossed the border into Canada at about 7:30 AM after a looong night of driving. At this point, I had no idea what to expect in regards to the hotel. But, as we drove down the main drag passing old souvenir shops and wax museums I started to get a good idea of what was in store.

We pulled up to the hotel, road weary and tired, praying that they would let us check in early so that we could get some sleep before we went out to see the sights.

We walked into the motel, er, lobby and were greeted by a Greek gentleman in his mid seventies. He spoke little to no English.

“I have a reservation, we are wondering if it is possible to check in early? We just drove in fro..”

He cut me off by picking up the phone, dialed a number and handed me the receiver.

I grabbed the phone just as a tired voice answered, “Hello?”

“Hi, uh, we have a reservation for Severson and are wondering if we can check in early?”

“Oh, of course!” he said in a Greek accent, “My father he does not speak the English very well. You can go to your room and come back down to check in around 11 when I am at the desk. If you hand the telephone back to my father I will have him get you key” he said.

After a brief conversation in Greek, the father handed me a key and pointed up the stairs. We picked up our bags and walked past the vending machine and coffee pot (continental breakfast). We made our way down the dimly lit hallway that had the stale smell of smoke still lingering from the seventies.

Our room smelled the same. It had a queen size bed, tiny bathroom, tv and had nothing on the walls. We did not care, we collapsed into bed and fell asleep.

I woke up at 11, took a shower and got dressed. The curtains were shut making the room dark. I woke my wife up and let her know I was going down to check in, she got up and jumped in the shower so that we could go down to see the falls.

I walked down to the desk and could immediately feel the tension. The man I spoke with on the phone was behind the desk with his dad now wearing a grey shirt with to many buttons undone showing off a gold chain nestled into his greying chest hair. He was in a spirited conversation with a man who looked to be in his mid 30’s and spoke with a stereotypical New York accent. They were arguing about the price. Behind him in line a father and daughter stood uncomfortably, dad in his mid 30’s and daughter around 10.

Basically New York guy claimed his room was a mess and was pretty sure it had bed bugs. The Greek guy said that he created the mess and they most definitely did not have bed bugs unless New York guy brought them with him (I LOVE situations like this so I was immediately entertained). I got in line to check in and enjoy the show.

A maid came busting out of the backroom unexpectedly calling the New Yorker a liar and that she had cleaned the room personally. Eventually, the New Yorker gave in and paid with a classic “go fuck yourself” storming out. These must have been the only 3 words in the English language that the Greek old man understood as he gave chase out into the parking lot with his son following and screaming in Greek.

After a few minutes of arguing like an umpire and a pissed of baseball manager the fight was over and they returned to the lobby. After a series of worried looks, the father and daughter said that they needed to go out to their car and promptly left The Diplomat Inn (not a bad decision, but I had already used my room and had no such luxury).

I stepped to the desk with a huge smile and said, “some people, huh?”

The man who I had spoken to on the phone, relieved that I had appeared to take his side, said, “Him and his buddies stay up all night drinking throwing trash all over their room and say that they should not pay because the room was a mess!”

Let’s see where this goes, I thought. Then, looking at the maid with a smile I said, “Our room was perfect, I can’t imagine what his problem is.”

She said, “They threw beer cans all over the floor and it smelled like grass in there.”

I shook my head in disappointment and looked back at Mr. Greek and said, “Thank you for letting my wife and I check in early, we drove all night from Minnesota, we really appreciate it.”

“You drove from Minnesota?!” he said surprised.

“Yeah, we are on our way to northern New York and wanted to see the falls.”

He handed me a receipt to sign and let me know that I was all set and just needed to be out of the room by 10 the next morning. I thanked him again and started back up to the room when halfway up the stairs I heard, “Mr. Severson! Mr. Severson!.”

My card declined, I thought, what am I going to do? (Remember, my mind always goes to the worst case scenario).

He came bounding up the stairs with a hand full of keys. He said, “You and your wife come all the way from Minnesota, you deserve a special room. I will give you a suite with jacuzzi at no extra charge… it’s normally $150!”

Awesome, I thought, this is going to be good. “Great” I said, “I appreciate it.”

He led me down the hallway and stopped at a door two down from the room we were already in. He knocked, then unlocked the door. It was dark but the room was a mess and there may have been a dead body inside. He quickly shut the door and said, “this room is not ready yet.”

We moved down to the next door, he opened it and this room was clean but he said, “one moment, I make sure the air conditioner is working.” He crossed the room and started fiddling with the knobs, then started slamming his fist into it. “This room needs maintenance, we will go to next door over.”

We moved on to the next door, this room was in acceptable condition. He led me inside.

At first glance the room was no different from the room we already had. Then, when I was a few more steps into the room and it opened up I saw the bedside, red, heart-shaped jacuzzi.

After he left, I ran down the hall to tell my wife about our upgrade. We moved into our new room and went out to explore, again thanking the Greek man for all he had done for us.

When we got back we did exactly what any married couple would do in a jacuzzi sweet… took a nap, ate some food, then got drunk (what were you thinking?).

We went to sit outside on the patio to do some people watching before we went out for the evening. As we were sitting under the bright, fluorescent glow of The Diplomat Inn sign, I noticed that they had put up the rates of their rooms for the night.

We weren’t mad, we didn’t complain. We decided the story is worth far more than the $50 dollars the Greek overcharged us. 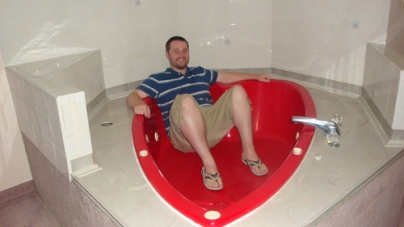 © Timothy C Severson and Tim Talks, 2020. Unauthorized use and/or duplication of this material without express and written permission from this blog’s author and/or owner is strictly prohibited. Excerpts and links may be used, provided that full and clear credit is given to Timothy C Severson and Tim Talks with appropriate and specific direction to the original content.